I remember a walk through Washington Square Park near NYU in New York several years ago. It was a beautiful Autumn day. A slight warm breeze carelessly tossed around crispy leaves in slow motion twisting circles towards the ground. A jogger or two ran by with an almost effortless motion, silent to me, as the ear buds kept their mix of songs private to only the runner. There’s always a few dogs, friendly and seeking that next adoring pat on the

head, inviting two previously unknown strangers to converse about pets, weather, and maybe even a great cup of coffee after their jog together. It was all in the distance for me, because I was engrossed in the game.

The Game
In Washington Park, like many public spots, the game is chess. In Washington Park the rows of tables were featured in the 1994 film, Searching for Bobby Fischer and form the cornerstone of what is called Manhattan’s “chess district”. While other games such as cribbage, dominos and backgammon are also popular, the real game here is Chess. In some corners there may be a single board, with two friends quietly engaged in a game. In other areas with carefully placed benches and tables there are multiple games. But this is not a game for the beginner, or the novice. Looking over the tables, and observing for just a few minutes, you can spot “The Game”. The game is a challenge between two long time friends, always looking for the latest notch in the belt, or bragging rights. Or, The Game may be an invitation to a stranger, finding an open bench across from a patiently waiting host. But these are not just players. These are the Masters. 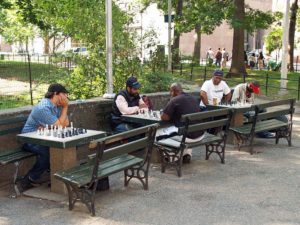 The Masters
I admit, I am not a Master. I am not a player. I do know the movement of each piece, and the object of the game. But strategically I do not belong at one of the concrete tables in this park. On this day, I am watching a Master. Challenger after challenger takes their turn, sitting across and offering their Game. For the past few games, I’ve begun to count. I’ve counted how many moves before both players look up at each other for the first time since they first tapped the clock. There’s that smile, and a soft whisper of “good game”. And the challenger smoothly stands and exits into the crowd, leaving the open bench for a next player. Chess experts will tell you the average number of moves in a game is somewhere between 38-40. As I counted, I found The Game lasted typically less than 12 moves.

The Strategy
I was not alone. A small crowd had gathered and we all smiled at reach other after the final move. I asked one of my new friends if he played much chess. With his affirmative reply, he offered some play-by-play on the next few games. How does he do it I asked? My friend indicated a great chess player plays the game in reverse. He is able to sense the strategies his opponent will employ. While mastering this uncertainty at chess is perplexing to me, it offers an end game to the Chess Master, and in his mind, he simply plots his steps in reverse, and makes the game and opponent succumb to his strategy in only a few moves.

The Leadership Game
I thought this story of chess in the park through for several months. I began to apply this chess strategy to my studies on business leadership. Great leaders, or perhaps Rare Leaders™ are playing the same game of chess with their opponents. For these Rare Leaders, the opponent is uncertainty. Uncertainty of the economy, competition, government regulation and taxes, global challenge, risks of people, financial risks, as well as suppliers, customers, and life in general keep them awake at night.
Rare Leaders™ look at uncertainty with a boldness. They play the game backwards, seeming to sense all the pieces of the puzzle as one, and seeing every dot on the page as if they were in a numbered order. Playing backwards, they put these puzzle pieces together and instill a picture of clarity for their Teams to take it to the finish line. These Rare Leaders™ connect the dots, and share a vision for an optimistic future, despite the sometimes grim realities of the day. Their charisma and planning make their game infectious, encouraging those on the sideline to join in rather than observe. And this single game suddenly becomes a Team sport. And the end of the game, is the end of uncertainty.

This Rare Leader™ is the ultimate Chess Master.

If you want to learn more about the Rare Leader™ in you,
or if you are interested in retaining Steve as your Executive Advisor or Coach,
Contact Steve Riege via: twitter, or his website.